A jail inmate has been sentenced to 7 years in prison for trying to strangle a Douglas County deputy. 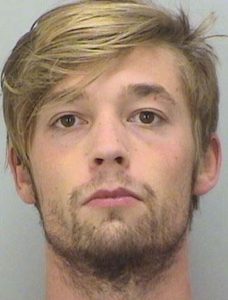 Douglas County District Court Judge Jeffrey Holmes on Monday sentenced Matthew Douglas Farmen, 25, of Highlands Ranch, to seven years in the Department of corrections. Farmen pleaded guilty May 6, 2019, to one count of second-degree assault of a police officer while in custody, a Class 4 felony. Other counts against him were dismissed as part of the plea agreement.

Farmen was being held pre-trial in a case where he was charged with stealing his mother’s car and hurting her in the process.

“Those are concerning instances for a man who is only 25 years of age,” Holmes told Farmen. “The deputy is there trying to do a difficult job – you assault him and hurt him badly enough that he is in physical therapy for months.”

“We will protect those who protect us. Farmen found a way to turn a probation-eligible car theft charge into seven years of prison,” said District Attorney George Brauchler. “Our law enforcement officers put their personal safety on the line for the rest of us every day. Anyone who attacks one of them will have the opportunity to exercise their full due process rights in our justice system. No question.”

“I am very pleased to see that the defendant will be held accountable for his actions not only against my deputy but against my office as a whole. When one of our own is harmed, it affects all of us. This deputy was just doing his job, trying to help the inmate, and was violently assaulted for no other reason but that he was deputy sheriff,” he said. “I completely support the prosecution’s efforts as well as the judge’s decision in this case. I thank the deputy for his tireless dedication to a job that is at most times thankless and quite frankly just as dangerous as any job out in the field.”

Farmen “had the deputy in a chokehold for 20-30 seconds,” Deputy District Attorney Zoe Laird said during her sentencing argument. “The deputy was just trying to assist the inmate, and he was met with violent and anti-social actions.”
The deputy asked the judge to send a message.

“I believe he needs to get the maximum sentence so the point is made and this does not happen to another deputy or correctional officer,” the deputy said.

Farmer also pleaded guilty to second-degree burglary in the underlying case. Holmes sentenced him to 4 years in that case, to be served concurrently.