Life plus 126 years for Thanksgiving Day murder in Aurora

A convicted Aurora felon has been sentenced to life in prison plus 126 years for a 2016 Thanksgiving Day murder. 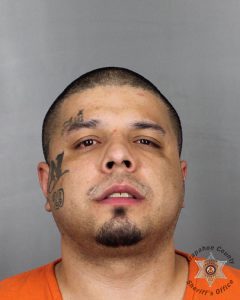 Arapahoe County District Court Judge Ben Leutwyler on June 21 sentenced Francisco Martin Talamantes, 30, for the death of Eduardo Hernandez-Zuniga, who was 45 when he was shot to death.

On Jan. 15, 2019, a jury found Talamantes guilty of first-degree felony murder, which is a mandatory sentence of life without parole. Talamantes was also found guilty of first-degree burglary, for which he got 48 years in prison; aggravated motor vehicle theft, a 48-year sentence; second-degree arson, 24 years; and tampering with evidence, 6 years. Judge Leutwyler found Talamantes to be a habitual criminal and all counts will be served consecutively.

“There is only one place for a lawless person who leaves death and destruction in his wake: prison, and a lifetime of it,” said District Attorney George Brauchler. “Prison can protect us from further evil, but it cannot bring back what has been taken. The innocent victim had his life ended, because he was in the wrong place at the wrong time. We must continue to endeavor to be a better people.”

On Nov. 24, 2016, Talamantes went to the Travelodge Motel on East Sixth Avenue looking to kill a man he said had “snitched.” Luis “Malo” Zamora-Ornelas, 20, and David Alberto “Pato” Garcia, 30, were with him.

Hernandez-Zuniga, 45, was in the motel room. He left to get a drink from the vending machine.

While he had stepped out, Talamantes, Garcia and Zamora-Orneleas came into the room with guns, looking for the man Talamantes called “snitch.” By all accounts, that man was never even in the room in the first place.

Hernandez-Zuniga knocked on the door to get back in, having purchased his soda. He got into an argument with the three intruders. Within seconds he had been shot, the bullet going through his arm and into his chest.

The shooters fled the scene and those in the room called 911. Hernandez-Zuniga was declared dead at University of Colorado Hospital.

Aurora police interviewed those in the room, obtained security camera video and developed suspect information about Talamantes, who was wanted on several outstanding warrants. Officers were sent to arrest him. They found him Nov. 25 in Denver in a stolen Hyundai Sonata that matched the description of the vehicle at the Travelodge.

Denver Police officers pursued the Hyundai, which was being followed by a Ford Edge.

Talamantes set the Hyundai on fire near West Cedar Avenue and South Tejon Street in Denver. He got in the Edge, which had also been stolen. Although to this point, his girlfriend was driving the Edge, Talamantes now took over the driver’s seat. Talamantes led the police on a high-speed, off-road pursuit, through portions of the Highline Canal bike path. Police chased the Edge to East Eighth Avenue and Canosa Street, where Talamantes was finally taken into custody, after he attempted to flee on foot.

The body of Zamora-Ornelas was found shot to death on front porch of 4353 Fillmore St. in Denver, shortly after the Travelodge shooting.

Garcia was arrested in Denver on Dec. 2, 2016. He was in a stolen car and became agitated at a driver stopped at a stop sign. He shot and killed Miguel Baray in a road rage incident just before his arrest. Garcia pleaded guilty in that Denver case to second-degree murder.

An Arapahoe County jury convicted Garcia of felony murder March 7, 2018, in the death of Hernandez-Zuniga. Judge Ben Leutwyler immediately sentenced him to life in prison without possibility of parole.

“These men cared nothing for human life, rule of law or the safety of those around them,” said Senior Deputy District Attorney Kelley Dziedzic, who prosecuted both cases with Chief Deputy District Attorney Christopher Gallo. “Mr. Hernandez-Zuniga was just in the wrong place at the wrong time. He did nothing that warranted his death and did not deserve to die. I am glad his killers got what they deserve.”