A Highlands Ranch woman who killed her newborn daughter will spend the rest of her life in prison after a Douglas County jury found her guilty of first-degree murder of a child under 12 by a person in a position of trust. 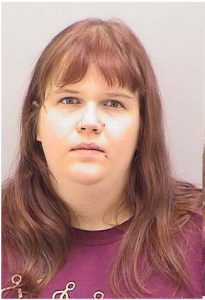 The jury found Camille Wasinger-Konrad, 25, guilty on all three counts: first-degree murder after deliberation; tampering with physical evidence; and the position-of-trust murder charge.

“Of all the many emotions of the magical first moments of a baby’s life, of all the many tender moments a mother shared in that first embrace with a completely helpless and fragile life, smothering a newborn and pitching its body over a fence in the cold of January is impossible to understand,” said District Attorney George Brauchler. “Who are we as a people that someone among us has such disregard for the most innocent of lives — a life they helped created? Disgusting.”

“It’s not only justice for the infant child but also a statement for the Douglas County community in how strongly we believe in the criminal justice system. We are glad to be a part of bringing this person to justice,” said Douglas County Sheriff Tony Spurlock. “I continue to be proud of the men and women of the Douglas County Sheriff’s Office and appreciate the hours the detectives on this case spent investigating it. We are grateful for the partnership we have with the district attorney’s office that brings results such as this one.”

Wasinger-Konrad was renting a room in the home of a Highlands Ranch family. Early in the morning of Jan. 2, 2018, she gave birth to a girl in her bedroom. She covered the baby’s mouth and nose to stop her from crying so as not to awaken others. She then carried the newborn downstairs to the back deck. She threw the baby into the backyard of a neighbor.

The neighbor found the dead child at 9:48 p.m. that night and called the Douglas County Sheriff’s Office.

“That little girl was on that deck for 948 minutes,” Deputy District Attorney Valerie Brewster told the jury. “This defendant went about her day, knowing her unnamed daughter was there, helpless. She thought and made that choice.”

“This tiny baby was smothered by her mother, flung over a neighbor’s fence and left to die by the only human she had ever known,” Gallo told the jury. “This defendant hurled her newborn 11 feet over an 8-foot fence, knowingly consigning her to her death. This little girl died in the cold without the dignity of even a name.”

Sentencing is set for Nov. 15 at 3 p.m.. The mandatory sentence for Murder 1 is life in prison without possibility of parole.

Note: Since 2000, Colorado has had a Safe Haven Law. A parent can hand over a newborn, up to 72 hours old, to an employee at any fire station or hospital with no questions asked.