Jurors found an Aurora man guilty of attempted murder for shooting the owner of an auto repair shop in the head. 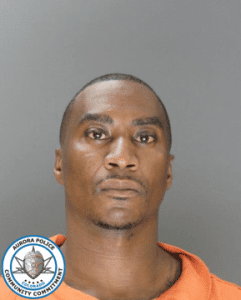 Taylor was charged with attempted first-degree murder, first-degree assault and possession of a weapon by a previous offender in the Sept. 5, 2017, shooting at Shaus Motorsports on East Sixth Avenue in Aurora.

“Spoiler alert: another felon with a gun. This one has been convicted not once, but twice before of this crime. We have grown weary of convicted felons who continue to get their hands on guns and then visit violence upon the innocent,” said District Attorney George Brauchler. “This repeat felon shot someone in the face over his anger about getting his car serviced. There is no place in civilized society for such a criminal. He has proven that no amount of rehabilitation or second chances will keep him from violent conduct. For those who continue to whine that we incarcerate too many criminals, what do you propose doing with this guy? This is why we build prisons and have mandatory sentences to them.”

Taylor was a customer at the shop. He called on Sept. 5, 2017, seeking to bring his car in for service. The employee who answered the phone told him the shop was booked that day. Taylor became irate and verbally abusive on the phone. Taylor said he was coming to the shop anyway and hung up.

Taylor showed up at the shop and walked inside to the service window, where he continued berating the employee, cursing her. The shop co-owner was nearby and moved to intervene.

The co-owner was unable to calm Taylor, who became even more agitated. Taylor began to throw things and pound on the countertop, refusing requests to leave.

This attracted the attention of the other owner of the shop, who came to the front of the building from the vehicle bays in the back.

The second co-owner joined the two employees at the service window and asked Taylor to leave. The second co-owner opened a drawer that had a knife in it. He removed the knife, stuck it in the countertop and told Taylor that they would defend themselves, and again demanded that he leave. Taylor continued to argue.

Then Taylor pulled out a handgun and ran around the corner to the door of the office, where he shot the second co-owner in the face. Taylor fled out the front door.

He was arrested by law enforcement the following day with the gun, more than $17,000 in cash, and fake temporary license plates in his vehicle.

“The defendant tried to kill the victim. That was his conscious objective,” Deputy District Attorney Francisco Martinez told jurors in closing arguments on Aug. 23.

“You don’t shoot someone in the face unless you plan to kill them,” said Deputy District Attorney Megan Brewer, who tried the case with Martinez.

A status conference is set for Sept. 12. A sentencing date has not been set. The presumptive sentencing range for attempted first-degree murder is 16-48 years in prison.

Taylor also faces habitual criminal charges. If he is convicted, the sentence for attempted first-degree murder is enhanced and becomes 96 years.