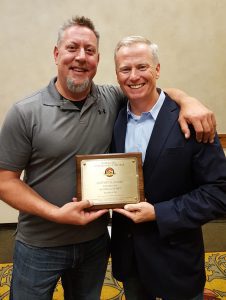 Hanagan joined the DA’s Office in March 2015. He leads the FLEX team and works with the Cold Case Unit, among other responsibilities.

The FLEX team within the Investigations Unit works together to protect victims and witnesses from threats associated with criminal cases.

In nominating Hanagan for the award, District Attorney George Brauchler said, “Hanagan was the logical choice to head this unit, due to his leadership, expertise, his genuine and impassioned concern for victims of crime, and unrivalled tenacity. … Under Matt’s leadership, our FLEX team has been extremely successful at locating and maintaining contact with victims and witnesses, and in addressing the many complications that tend to arise in these situations.”

DA Brauchler cited the prosecution of Terrance and Tina Black, who were convicted of the murder of a witness to a marijuana store robbery they orchestrated.

“Without the team’s work in producing and keeping these important and vulnerable witnesses safe, the outcome of these cases would likely have been very different,” Brauchler said in his nomination letter. “Matt’s team is in the business of protecting victims and witnesses. They save lives. They are unmatched in their success in that business.”

DA Brauchler also cited Hanagan’s work to bring the Investigation Unit into 100 percent POST compliance with state law enforcement standards, as well as his willingness to train and teach others.

Hanagan is a certified instructor in defensive tactics, FTO, Taser, and is a State of Colorado Crisis Intervention Team member. He also teaches on topics including criminal procedure, stops and seizures to law enforcement academies, new detective and citizen academies. He regularly speaks to students at Arapahoe High School about basic drug facts and life skills.

“I am honored to be nominated for this award, let alone be selected to receive it,” Hanagan said. “It is my privilege to work in the Investigations Unit, the courtroom and the community on behalf of victims of crime. It is only because of the support of my colleagues, DA Brauchler and other members of the office that I am able to be successful.”

Prior to joining the District Attorney’s Office, Hanagan worked for the Arapahoe County Sheriff’s Office for 15 years, where he held many positions, from patrol to South Metro Drug Task Force to the Impact Team to serving as a supervisor with the rank of sergeant.