A sex offender who was on parole for a drug charge in Georgia and wanted in a robbery in Florida will spend 96 years in a Colorado prison for a crime spree that took him from Denver all the way to New Mexico. 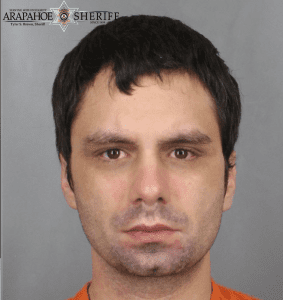 Arapahoe County District Court Judge Ben Leutwyler sentenced Eric Ray Weston, 37, after he pleaded guilty to six of the 29 counts against him. Other counts were dismissed as part of the plea agreement.

“Another convicted felon on parole is able to get his hands on a gun and then uses it to threaten five innocent people, kidnap a sixth, and burglarize a home,” said District Attorney George Brauchler. “A system that continues to allow this type of offender back on our streets is one that needs significant improvement. This is why we build prisons.”

On June 23, 2017, two sisters met Weston in Littleton midmorning to purchase a vehicle he had posted on “Let Go.” Weston got in their car with them to go see the sale vehicle. The sisters became uncomfortable, and they told Weston they were no longer interested.

That is when Weston pulled out a handgun and pointed it at them from the back seat. The sisters ran screaming from their car – Weston ran in the other direction.

A nearby man heard the screams and saw Weston running by. He chased Weston down and asked what was going on. Weston pulled out the gun and pointed it at the man’s head. When Weston learned the man did not have car keys, he ran off.

Next Weston entered a parking lot where a woman was sitting in her parked car. He opened her door, pointed his gun at her head and told her to get out. She did. Weston drove off in her car.

Another witness tried to stop the car and Weston pointed the gun at him, too.

All of these victims reported what happened to Littleton Police.

The stolen car was spotted by Englewood Police. Weston eluded officers in a high-speed chase before abandoning the car.

Weston then broke into and hid in a house in Denver near where he left the stolen car. The unsuspecting homeowner came home early and found Weston hiding in his bedroom. Weston held the homeowner at gunpoint for several hours until police activity subsided.

Then Weston took the man’s cell phone and forced him at gunpoint to get in his car and drive him to Albuquerque. Once there, Weston kept the phone but let the man go; he drove back to Denver and reported the kidnapping to law enforcement.

“Eric Weston is a dangerous predator with no regard for the law. He terrorized victims in Florida and Colorado because he was unwilling to obey the rules of parole in Georgia. His criminal behavior escalated over the course of his life. We count our blessings he did not pull the trigger on June 23, 2017,” said Deputy District Attorney Michael Mauro, who prosecuted the case with Senior District Attorney Garrik Storgaard. “Seven different law enforcement agencies across Georgia, Florida, Colorado, and California are to be commended for their collaboration to investigate, track, and apprehend Weston.”