10 years for woman who drove stolen car at Englewood officers

A woman who stole a car and tried to drive into Englewood officers as they moved to arrest her was sentenced to 10 years in prison. 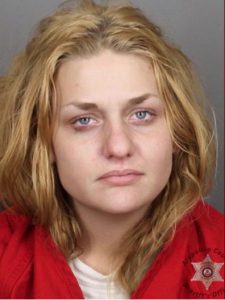 Arapahoe District Court Judge Darren Vahle sentenced Chayley Tobin, 27, of Sheridan on Jan. 3 after she pleaded guilty to one count of second-degree assault on a peace officer, a Class 4 felony. Other charges against her were dismissed as part of the plea agreement.

“Heads up to those who still don’t get it: If you threaten, attack, or try to hurt our women and men in uniform, you put your health at risk and, in the best case scenario, you will lose you liberty,” said District Attorney George Brauchler. “An attack on those who serve and protect is a serious crime and will be vigorously prosecuted. And in this case – as in many – passersby were also put in danger by the criminal conduct.”

On Jan. 16, 2019, Englewood Police officers tried to arrest Tobin, who was a driving a stolen vehicle in the parking garage at Swedish Medical Center. Tolin disobeyed commands to stop and instead tried to hit officers with the car as she attempted to drive away. Two officers fired shots at her and their actions were determined to be legally justified.

Tolin was seriously injured but recovered.

“The defendant decided trying to get away in a stolen car was more important than the life of a police officer and any member of the public who was in the hospital parking garage that day,” said Deputy District Attorney Daniel Martin, who tried the case with Senior Deputy District Attorney Garrik Storgaard. “This lack of regard for the safety of others demonstrated by the defendant’s actions deserved the sentence to the Department of Corrections she received.”