A woman who killed two people in a car crash as she was evading arrest was sentenced Thursday to 20 years in prison. 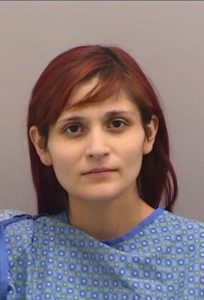 Bixby pleaded guilty Feb. 13 to two counts of vehicular homicide DUI in the deaths of Ryan Scott Carter and Jayne Frances Davicsin. Carter was 27 and Davicsin was 25 when Bixby crashed into their car as she was speeding on U.S. 85 near Mineral and ran a red light.

“To those who believe there is no more need for prisons, let this case be a reminder of the massive disparity between the punishment and the crime. This is an eyelash for an eye,” said District Attorney George Brauchler.  “Because of Colorado’s offender-friendly sentencing structure, this self-absorbed killer of two innocent, young adults will likely be back on our streets before she turns 30. Ryan and Jayne will never get to turn 30. For the victims she crushed as she fled, for our community … how can this be justice? Colorado can and should do better.”

The incident began about 2 a.m. Feb. 6, 2019, when a Douglas County Sheriff’s deputy on patrol spotted what appeared to be a car break-in in Castle Pines. A sedan and an SUV left the scene, and the deputy followed them to contact the drivers.

The suspect vehicles were travelling north on U.S. 85 when the deputy tried to pull over the SUV, which was behind the sedan. The SUV raced off and did not yield to the deputy. Other units were called in to assist.

The sedan sped off travelling northbound in the southbound lanes of U.S. 85, at times reaching speeds of more than 100 mph. It crashed into the car Carter and Davicsin were in, killing both of them.

“The defendant plowed into the intersection and T-boned the victims’ vehicle, with catastrophic consequences. The scene was horrific,” Deputy District Attorney Meghan Gallo told the judge during sentencing on June 26. “The defendant exhibited 17 miles of extremely dangerous behavior – choosing to continue to speed while high on meth for mile after mile. She put everyone in her path at risk.”

Bixby, the driver of the sedan, was taken to Littleton Adventist Hospital to be treated for her injuries. The sedan had been stolen in Aurora.

The SUV, which was also stolen, was later found abandoned. Investigators determined Mario Juan Augustine Jose, 24, had been driving the SUV. He was arrested in Denver on Feb. 19, 2019.

Jose pleaded guilty Aug. 19 to one count of vehicular eluding. On Oct. 21, he was sentenced to three years in prison.

Friends and family of both victims gave statements during sentencing; at times 60 people were on the Webex hearing.

“Our hearts are broken by the actions of Miss Bixby. She killed two people, and their lives mattered. No one can imagine the shock and pain we endured at the hands of this criminal,” Carter’s mother told the court. “Ryan did not deserve to die over something so senseless. He had so much to offer the world, and he should have had so many years of life. We feel cheated, and we will always wonder what if …

“Deanna Bixby took everything away from us.”

Judge Herron chastised the defendant as she imposed the sentence.

Deanna Bixby “has lived her entire life with an absolute complete disregard for the lives and properties of others. She has lived a life that is all about her and is selfish beyond words,” Herron said.

She added, speaking directly to the defendant: “I see nothing that tells me that you are experiencing any remorse or regret. I see nothing that indicates you have any clue or any appreciation for what you have done. … I don’t believe you when you say you want to turn your life around – you have said that before and it has not been true. I don’t think it is true now.”

20 years for speeding driver who was high when she killed 2 people was last modified: June 30th, 2020 by Eric Ross