It’s not every day that a Colorado district attorney testifies before a committee of the Israeli legislature, called the Knesset. But last week 18th Judicial District Attorney George Brauchler did just that, via Zoom.

The nation of Israel approved medical cannabis in June 2016, and now legislators are looking toward decriminalization and regulation of recreational marijuana. 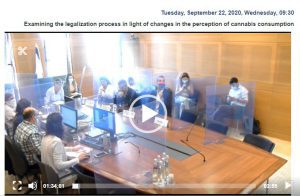 The Special Committee on Drugs and Alcohol of the Israseli Knesset listens to District Attorney George Brauchler via Zoom.

As district attorney of Colorado’s most-populous judicial district since voters passed Amendment 64 in 2012, Brauchler was in a unique position to offer perspective and guidance to the Knesset’s Special Committee on Drugs and Alcohol.

District Attorney George Brauchler talks via Zoom to the Special Committee on Drugs and Alcohol of the Israeli Knesset.

“We have seen the professionalization of the black market for marijuana, with people coming to Colorado from other states and other countries,” Brauchler told the committee. “Because we were the first state to legalize and regulate recreational marijuana, we became an exporting hub for entrepreneurs operating outside the legal framework.”

Brauchler talked about some of the difficulties created by people being allowed to grow large quantities of marijuana in their homes, as well as increases in some crimes and mental health issues. Committee members asked questions about marijuana-impaired driving, cannabis taxation and juvenile use. They asked for District Attorney Brauchler’s advice as they move forward.

“Be sure to have metrics in place, and be sure to address potency. Create a regulatory environment for cultivation as well as retail sales,” he cautioned the Israeli legislators. “The black market never goes away. But it is an affront to the legal system, and you need to protect those who are trying to follow the law.”

Kotler-Wench thanked District Attorney Brauchler for speaking to the committee. She said, “We understand that in Israel, we must have an orderly plan (for marijuana decriminalization and legalization), otherwise the process will fail.”