A Nebraska man has been sentenced to 18 years in prison for the hit-and-run crash that killed avid cyclist Edward Charles “Chuck” Vogel, Jr., of Parker. 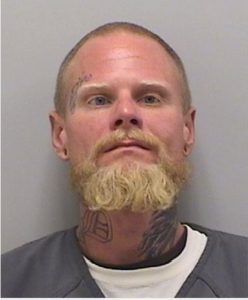 Vogel was riding his bicycle southbound on Pine Drive in unincorporated Douglas County when he was hit from behind by a Kia Spectra driven by Dorris. The crash happened at 6:25 a.m. Vogel died the next day.

The Kia was found abandoned in Parker on July 5, 2019. Detectives traced the car through the registered owner to Dorris. He was arrested outside Alliance, Neb., on July 12. Dorris had come to Colorado to buy drugs.

“This case literally hit close to home. My kids and I ride bikes in that area and on that road,” said District Attorney George Brauchler. “This man was a pillar in the Parker community and gave untold volunteer hours to help others. Mr. Vogel was taken from us by a selfish coward who hit him and drove off. The public should know that Colorado’s incredibly weak laws in the area mean that this killer likely will be back on our streets in less than six years. Coloradans … the Vogels … deserve better.”

Vogel’s family and friends gave impact statements during the Aug. 28 sentencing hearing. Close to 80 people on Webex joined those physically in the courtroom.

“This defendant didn’t call for help, and he didn’t turn himself in – he just waited for law enforcement to find him. He has a total disregard for human life,” one friend told the court in asking for the maximum sentence. “He tore apart the lives of Chuck’s family and friends. Give him the same mercy he gave Chuck.”

“On July 4, 2019, I had to drive from Salt Lake City to Denver with my pregnant wife, knowing I was going home to watch my father die,” Vogel’s son said. “He was left on the side of the road to die – not surrounded by friends and family, but alone. … And now his granddaughter will never get to know her grandpa.”

“Chuck was left on the side of the road like a piece of trash. That was my husband, my best friend – he never regained consciousness and was on life support” she told the court. This defendant “has shown he will not choose rehabilitation, and now it is time for him to be held accountable … This was a crime, and he needs to pay – not just for Chuck, but for all those pedestrians and cyclists out there.”

Prosecutors cited the defendant’s prior criminal history in sentencing arguments, noting that Dorris has had 2 felony and 23 misdemeanor convictions since 2003. Chief Deputy District Attorney John Kellner asked for the maximum sentence of 18 years.

Dorris “never braked, slowed down, swerved or turned back. The defendant wasn’t speeding. It was clear – he could see 310 feet ahead,” said Kellner, who prosecuted the case with Deputy District Attorney Meghan Gallo. “Marijuana and an open bottle of vodka were found in the abandoned car. … He stole the life from Chuck Vogel and deprived Mr. Vogel’s family and his community of many years of his contributions.”

Judge Slade spoke at length to Dorris before imposing a sentence.

“In this time of COVID, I am struck that life is fragile enough without people doing what you did. What you did that day and the days following is cowardly – there is no other way to describe it. There is no way to defend that,” she said.

She added: Mr. Vogel “would have been the first one in line to make sure you had what you needed. That’s the kind of guy you took away from the community.”

She imposed the maximum sentence of 18 years.

Dorris pleaded guilty to:
• Leaving the scene of an accident involving death, a Class 3 felony
• Vehicular homicide – reckless driving, a Class 4 felony
• Careless Driving- — vulnerable road user, a traffic misdemeanor. This is a new law from 2019.