17 years in prison for school employee who preyed on students

A former school employee who preyed on five girls at Rangeview High School was sentenced to 17 years in the Colorado Department of Corrections. 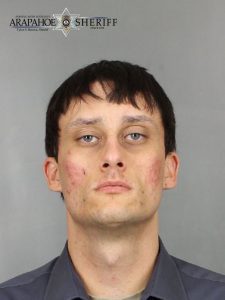 James Dolmas, 29, was employed as a hall monitor and theater assistant at the school. He used his position to gain the trust of underage girls, then solicited and exchanged sexually exploitative photos with them, had unlawful sexual contact with some of them and had sex in the school with one of the students. He derived sexual pleasure from violence, and the sexual contacts left physical marks on the girls. He was arrested in July 2019.

He pleaded guilty Aug. 10, 2020, to two counts sexual exploitation of a child, a Class 3 felony. Other counts against him were dismissed as part of the plea agreement.

Prosecutors asked for 20 years in prison, the maximum sentenced allowed under the plea agreement.

“This defendant sexually assaulted four girls. … These are not mistakes – these are crimes. And he asked the victims to help him cover up his actions,” Deputy District Attorney Elizabeth Gramer said in her sentencing argument on Nov. 24. “He physically and sexually abused them. He started very manipulative relationships with these victims. … He got them used to pain, because he found that arousing. He did this at the school to students. It was about power and control.”

Many of the victims and their families also spoke via Webex during sentencing.

“What he did using his position of trust left me feeling that I was the one who did something wrong. I did trust him, and I was vulnerable,” one victim said. “I was too terrified and ashamed to tell anyone.”

“It is soul-crushing to know you were unable to protect your child,” one mother said. “The school should be a safe place.”

“The sexual contact and the volume of actions and number of girls is very concerning. But what is most disturbing is the violence,” Whitaker said. “He preyed on these girls.”

“There is a line in the sand, and no matter what students do, it is the adults’ responsibility to stand hard and fast on the right side of that line. A violation of that trust is shattering.”

She imposed a sentence of 17 years in the Department of Corrections.

“Here is yet another school employee who treats our schools like they are a candy shop. How can our system craft an appropriate sentence for the exploitation of innocent children for lascivious personal satisfaction? Yes, prison protects our children for a while, but when this criminal is released, he will still harbor the cravings that put kids at risk,” Brauchler said. “Coloradans should know that there are those in the legislature who intend to further weaken the laws that protect our kids from sexual deviants. When they launch their bills next year, tell them how you feel about choosing offenders over victims.”

17 years in prison for school employee who preyed on students was last modified: November 27th, 2020 by Vikki Migoya