Driver who was high when he killed motorcyclist gets 8 years

On Aug. 19, 2019, Tom Neubert was riding his Harley Davidson motorcycle to work from his home in Parker. It was a little after 6 a.m., and Neubert was on his way to his job with Fleet Management for the City of Aurora. 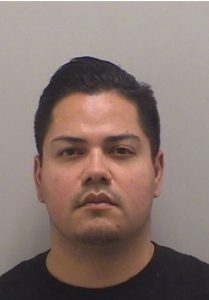 He didn’t make it.

Manuel Enrique Frias was driving his car and plowed into Neubert’s bike in the intersection of North Piney Lake Road and East County Line Road in Douglas County. Frias got out of his car and watched as passersby stopped to try to help Neubert. Then, Frias slipped away into the surrounding Blackstone neighborhood. It could have been that he left because he didn’t want anyone to know that he was high on oxycontin and had meth in his car.

Frias didn’t get away, and on Friday, Douglas County District Court Judge Theresa Slade sentenced him to eight years in prison for Neubert’s death.

“The only proper sentence for taking the life of another human being while you are driving high is prison,” said Deputy District Attorney Zoe Laird, who prosecuted the case with Deputy District Attorney Dan Warhola. “Mr. Neubert did nothing wrong and was just on the road, driving to work, as so many of us do. His family is living with the consequences of the defendant’s actions forever, and it is appropriate that the defendant serve time in prison for the deliberate and deadly decisions he made.”

Neubert was 56 years old when he died. He had six siblings, including a twin brother. He was married with two children and three step-children. So many friends and family members wanted to offer impact statements on Jan. 22 that the sentencing hearing lasted more than five hours.

They spoke often of his strong Christian faith, his generous and unselfish nature and his Model T Ford. They talked about his infectious spirit and his Oktoberfest celebrations.

They spoke of forgiveness and loss, but also of consequences.

“Tom was a special person. He was unassuming, always encouraging, always helpful, always kind, and quick to smile. He was interested in cars, motorcycles, and anything mechanical. He was a skilled mechanic and well known as the guy who could fix anything,” one family member said. “Tom’s death has left a gaping hole in our lives. It is a huge loss and (Frias) alone is responsible for it. He decided to get high and to get behind the wheel and drive. There has to be a cost for his reckless actions. He made decisions that took an innocent life….

“And as Tom lay splattered on the pavement, (Frias) decided to run.”

That decision also resonated with prosecutors.

“This death was entirely preventable. If the defendant did not choose to take illegal drugs and then get behind the wheel, Mr. Neubert would be alive today, supporting his family and contributing to our community,” said Warhola. “For the defendant to also flee the scene compounds the criminal acts he committed that morning.”

Frias, 30, of Commerce City, pleaded guilty Nov. 2, 2020, to one count of vehicular homicide DUI and one count of leaving the scene of an accident involving death. Other counts were dismissed as part of the plea agreement. Both charges are third-class felonies, and there is no mandatory prison time for either.

Driver who was high when he killed motorcyclist gets 8 years was last modified: January 26th, 2021 by Eric Ross