A Federal Heights man in a stolen truck who rammed an Arapahoe County Sheriff’s Office deputy and patrol car was sentenced to 10 years in prison. 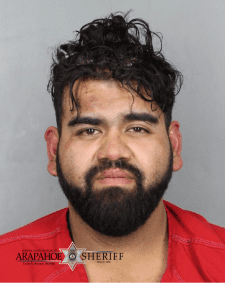 Arapahoe County District Court Judge Ben Leutwyler on Monday sentenced Diego Gallegos Castorena, 24. He pleaded guilty March 8 to one count of second-degree assault, a Class 4 felony. Other counts were dismissed as part of the plea agreement.

“You don’t get to ram a patrol car and injure a deputy and then just walk away,” said District Attorney John Kellner. “This defendant chose to commit a crime and then, rather than surrender, he made things worse when deputies tried to apprehend him. This just shows the dangers law enforcement officers face every day to uphold the law, even when responding to what some claim are ‘low-level offenses.’ ”

On Jan. 22, 2020, Arapahoe County Sheriff’s deputies were informed of plans for an illegal drug transaction at an apartment complex. When Castorena arrived at the complex in a stolen truck, deputies blocked the truck into a parking space and moved to arrest him. Castorena rammed the sheriff’s vehicle and hit a deputy. When Castorena backed up towards other deputies, one fired a weapon at him.

Castorena was hit by the deputy’s gunfire but recovered. The deputy’s actions were ruled legally justified by the District Attorney’s Office.

“This defendant not only broke numerous laws, but he also chose to endanger the lives of law enforcement officers. One deputy was seriously injured; the other saw what happened to his partner and was forced to act,” McCreary said. “The disregard for law and safety shown by this defendant made clear that incarceration was the appropriate outcome in this case.”