The teenager who orchestrated a vape juice robbery that led to the death of a Centennial teen was sentenced Wednesday to life in prison with the possibility of parole after 40 years. 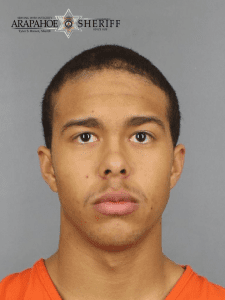 Arapahoe County District Court Judge Ben Leutwyler sentenced Kenneth Gallegos, 19, of Aurora, for his role in the murder of Lloyd Chavez IV. The victim was 18 years old and a student at Cherokee Trail High School when he was shot and killed outside his home on May 8, 2019.

“If Kenneth Gallegos lived the things he learned in kindergarten, we would not be here today,” Leutwyler said. “But for your actions, Lloyd Chavez would be alive. You set the events in motion. … I am struck by the utterly senseless decisions that were made that day.”

“The jury convicted this defendant of murder. He planned this crime and made sure it was executed, and that resulted in the needless death of a young person full of promise,” said District Attorney John Kellner. “When a gun is involved in a crime, bad things can happen, and that is what we have here.

“This sentence won’t bring Lloyd back, but perhaps his family can find some comfort in it.”

Members of Chavez’s large family were present in the courtroom for sentencing and gave statements to the court.

Chavez’s maternal grandmother read a statement from his younger sister, who was the first to come to Lloyd’s aid after he was shot.

“What happened that night has scarred me for life, and I can’t get it out of my head,” she said. “And I have to live without (Lloyd) every day of my life.”

An aunt told the judge Gallegos was a “callous, hollow, remorseless human who has shown no emotion.” She asked the judge to “give this family the justice we deserve.”

Sandrock read a statement from Chavez’s paternal grandmother during the June 2 sentencing hearing.

“Without the defendant’s plan and execution of it, my grandson would be alive today. It has been clear to me that he is NOT sorry for what he did. I believe he is only sorry that he got caught. It made me sick to my stomach to see him the day he was found guilty and have no reaction. …

“I am justifiably asking the court that Kenneth Gallegos receive the maximum sentence allowed. Though his sentence will never be enough to compensate for a lifetime without our precious Lloyd, I believe there would be some deserved justice for our family if he is locked away for life. Even with a maximum sentence he gets to live and breathe. Our little Lloyd does not.”