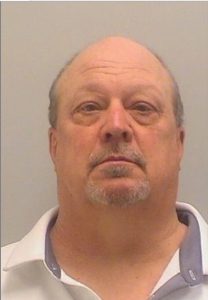 A Douglas County man who attacked his wife with a Samurai sword in a horrific domestic violence incident was sentenced to 14 years in prison.

“Violence is not a normal part of any relationship,” said District Attorney John Kellner. “This defendant attacked his wife and nearly killed her. His circle of blaming her for his aggression and then apologizing and saying it will never happen again ends here.”

On Dec. 19, 2019, Keller’s wife frantically called 911. She told the dispatcher her husband was out of control with a knife, and she didn’t feel safe. While the wife was on the phone, the 911 dispatcher heard her scream, “Tom get away from me, put that sword away!”

The wife was hiding in a bedroom closet. Keller broke through the door and swung a katana type sword at her. The blow hit her on the wrist and severed two arteries and three tendons.

The wife was able to shove her way past Keller and run into the street, where an arriving deputy immediately applied a tourniquet. Doctors later said the tourniquet saved her life.

Other deputies found Keller in the house and took him into custody after a brief standoff.

“This defendant had been previously charged for felony level domestic violence with the same victim and received treatment; yet here we are in court sentencing him again after another domestic violence offense,” said Senior Deputy District Attorney Valerie Brewster, who prosecuted the case with Deputy District Attorney Sherri Giger. “The defendant tried to blame alcohol and at times the victim for his behavior. This sentence is a clear message that the defendant and the defendant alone is responsible for his actions. But for the strength and courage of this victim the People would not have been able to hold him accountable.”

If you are in an abusive relationship, get help from the National Domestic Violence Hotline at 1-800-799-SAFE (723) or thehotline.org