Kelly Renee Turner was sentenced Wednesday. Feb. 9, to 16 years in the Colorado Department of Corrections for killing her daughter Olivia. 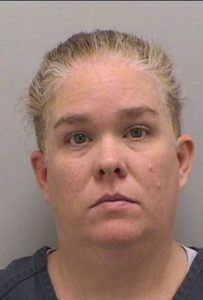 “By pleading guilty, the defendant admits what she did to Olivia. She also lied about her daughter’s condition and using those lies to her own financial gain. This is a despicable crime, and absolutely this defendant deserves to serve years behind bars.”

In 2018, Douglas County Sheriff’s investigators began looking into Turner, who lived in Highlands Ranch. Doctors and child welfare workers were concerned about one of Turner’s daughters. Turner kept bringing that daughter in for treatments that were not medically necessary, and Turner admitted to lying about her daughter’s medical history.

When the doctors and child welfare workers discovered that Turner’s daughter Olivia had died of a mysterious, untreatable illness at age 7 in 2017, they contacted law enforcement.

The surviving juvenile daughter was moved from Turner’s care, and she improved.

Investigators took the case to the grand jury, which has subpoena power. Several doctors said that descriptions of Olivia’s ailments were dependent on Turner, who approved surgery after surgery and insisted Olivia was not getting better. It was Turner who pushed for a Do Not Resuscitate order and sought to put Olivia into hospice care.

Turner lied about not having access to private insurance and enrolled her family in Medicaid to pay for giant health care bills. She turned Olivia into a media story, and sought donations for her care, expenses and funeral on fundraising platforms and from charities.
Turner was indicted on 13 counts by the 18th Judicial District Grand Jury in October 2019.

“This is not a perfect justice by any means,” Gallo said of the case’s resolution, “but it is in the interest of justice. This plea recognizes some level of accountability for this vile, unthinkable years-long crime.”

“There is no plea agreement or trial outcome that can atone for what was done to Oliva during her short seven years of life,” Brewster said. “But today guarantees that there will be a permanent record and a recognition of what she endured; Olivia deserves at least that.”