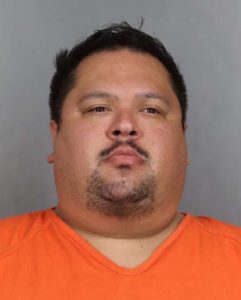 An Arapahoe County District Court Judge sentenced Brian Eugene Barcelona, 35, to 200 years to life in prison for sexually assaulting three children as part of a pattern of abuse that spanned a 4-year period.
On August 26, 2018, the Aurora Police Department began an investigation after an Aurora father reported that his son had been sexually assaulted by his adult cousin. Investigators discovered that, between 2015 and 2018, Barcelona had repeatedly sexually assaulted the boy and his two siblings whose ages ranged between 10 and 13. Investigators also found photographs of the sexual abuse on Barcelona’s cell phone when he was arrested. Barcelona pleaded not guilty to the charges that followed, and the case proceeded to trial on October 25, 2021.
Following a 7-day jury trial, Barcelona was found guilty of 12 counts of sexual assault of a child by one in a position of trust, and four counts sexual exploitation of a child.
Senior Deputy District Attorney Danielle Jaramillo, who tried the case with Deputy District Attorney Abby Hegarty, put the defendant’s conduct into context. “In all my years of prosecuting these types of cases, I struggle to recall another one involving such severe abuse or brazen conduct,” Jaramillo said. “The defendant felt so secure in his ability to exploit his position of trust to silence these children that he actually kept photographs as trophies.”
The honorable Judge Joseph Whitfield, who presided over the trial, noted the long-lasting impact that the Barcelona’s actions are likely to have on the victims and their family before imposing the sentences consecutively, effectively ensuring a life sentence.
“This predator selfishly sacrificed the well-being of his own relatives to satisfy his depraved desires,” District Attorney John Kellner said. “I am grateful for the bravery of these young victims who came forward to put a stop to his destructive manipulation.”
Man sentenced to 200 years to life in prison for sexually assaulting three children was last modified: March 22nd, 2022 by Alberto Borrero