Man sentenced to six years in prison for inciting a riot that burned the Aurora Municipal Courthouse. 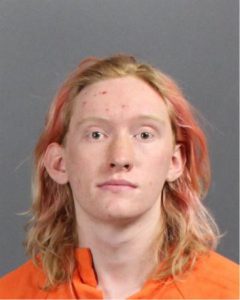 An Arapahoe County Judge sentenced Jordan Joseph White, 20, to six years in the department of corrections for his leadership role in a siege on the Aurora Municipal Courthouse during the summer of 2020.
On July 25, 2020, a large group of protesters converged upon the Aurora Municipal Center Complex. The complex is comprised of multiple buildings including the Municipal Center, Aurora Police Headquarters, the Aurora History Museum, and the Aurora Municipal Courthouse. Anticipating acts of property damage, many of the windows on the ground level had already been boarded up.
After a march that shut down traffic on several roadways including Interstate 225, the protesters returned to the complex. From there, the protest devolved into a riot as several participants wearing helmets, goggles, and masks covered surveillance cameras and began tearing down a fence. The rioters also launched commercial-grade fireworks horizontally at police officers who were staged in the area.
Shortly thereafter, rioters began to tear down the protective boarding that had been put up on the courthouse, and used it to smash windows. Fireworks were then set off inside the building, causing further destruction. Five courthouse employees were trapped inside the building while the rioters amassed more than $74,000 in property damage.
During the investigation, White was identified on surveillance video wearing military-style fatigues, smashing windows, directing other rioters, and throwing lighted fireworks into the building through the broken windows. Prosecutors charged White with six counts: first degree arson, inciting a riot, criminal mischief, engaging in a riot, and disobedience of public safety orders under riot conditions. As part of a plea agreement, White pleaded guilty to two felony counts: inciting a riot and fourth degree arson. Sentencing was left open to the court.
“An attack on a courthouse, on the place people go to seek justice, is an attack on the rule of law itself,” District Attorney John Kellner said. “Violence and destruction are not how we solve problems in our democracy, and this sentence should deter anyone who thinks to do this in our community.”
At the sentencing hearing held on March 4, 2022, Deputy District Attorney Justin Friedberg showed pictures and videos of the extensive property damage, but also noted the acts also took a human toll. “Twenty-seven people had to come in the next day and just sit down in the rubble and get back to work,” Friedberg said. “The aftermath only speaks to the violent nature of the acts, but doesn’t’t speak at all to the trauma of the judges and court staff that had to return to that scene.”
Witnesses during the sentencing hearing spoke about their experiences inside the building while rioters tried to set it on fire and the emotional trauma felt by court staff. Aurora Police Chief Vanessa Wilson spoke about the impact on the officers and the possibility the fire could have destroyed evidence held at the police department.
“This was not an act of civil disobedience,” Judge Ryan Stuart said before imposing the sentence. “Attacks on our temples of democracy—our capitols and our courthouses—must be met with swift justice.” In addition to the prison sentence, the Defendant was ordered to pay $74,463.50 in restitution to the city of Aurora.
Man sentenced to six years in prison for inciting a riot that burned the Aurora Municipal Courthouse was last modified: March 7th, 2022 by Alberto Borrero