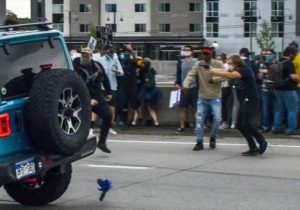 An Arapahoe County jury convicted Samuel Young, 24, of seven felony charges on Thursday, for the shooting on I-

225 where he fired at a blue Jeep driving past the protest crowd and wounded two bystanders on the side of the roadway.

On July 25, 2020, after a protest demonstration at the Aurora Municipal Center, a crowd of protesters marched onto Alameda Avenue and then Interstate 225. The crowd eventually took over all lanes of traffic on both sides of the interstate and continued marching northbound. Despite attempts to block traffic at several intersections, some motorists still approached the area of the protest crowd which was not authorized to be on the interstate. After the driver of a blue Jeep drove onto the interstate and was intentionally hit by a truck associated with the protest group, he continued driving northbound as some pedestrians threw objects at the Jeep driving in the middle lanes of traffic. Samuel Young stepped from the shoulder of the interstate and fired 5 shots at the Jeep as it tried to drive past the crowd. Two shots hit the back of the Jeep after it drove by the Defendant, and two shots struck and wounded bystanders on the opposite side of the interstate. One victim was struck in the thigh and one victim was hit on the side of the head. The driver and passenger of the blue Jeep were not injured. There were no reports that anyone was injured by the Jeep and it did not exceed the speed limit.

Investigators identified the Defendant, Samuel Young, based on witnesses and pictures from the protest. He admitted he was the suspected shooter after media bulletins were publicized the next day. Investigators collected video footage and pictures from a news helicopter, cell phone cameras, social media sites, stationary traffic cameras, and a drone camera operated by a witness in the protest crowd. The Aurora Police Department and District Attorney’s Office investigated the incident, collecting witness statements, ballistics evidence, and electronic data from the vehicles involved.

Mr. Young pleaded not guilty to all charges and proceeded to jury trial on March 22, 2022. The jury deliberated and returned verdicts on March 31, 2022, finding him guilty of seven counts, including four counts of Attempted Reckless Manslaughter, two counts of Second Degree Assault (heat of passion), and one count of Illegal Discharge of a Firearm.

“This was an irresponsible and reckless decision that put countless lives in danger” District Attorney John Kellner said.  “The Defendant brought a handgun to a protest taking over a major interstate and it’s fortunate that no one was killed by his violent conduct that day.”

Assistant District Attorney Tom Byrnes handled the case with Deputy District Attorney Mike Mauro. Byrnes told the jury “the Defendant’s decision to shoot at the Jeep was intentional and it was reckless to fire his gun 5 times in the direction of the crowd. Those decisions were not justified by any reasonable or legitimate claim that he was defending others.”

A sentencing hearing is set for May 17, 2022. Young faces up to 3 years in prison on each of the Attempted Manslaughter charges and the Illegal Discharge conviction, and up to 4 years for the Second Degree Assault convictions.

Jury convicts man who fired at Jeep and hit protesters on Interstate-225 in Aurora was last modified: April 1st, 2022 by Jon Saultz