The investigation found Abcug subjected her son to medical child abuse, commonly known as Munchausen Syndrome by Proxy, and then plotted to kidnap him from the foster home where he was living after he was removed from her care in 2019.

Evidence showed shortly after her son’s removal, Abcug planned to take her son back with assistance from unknown individuals, possibly QAnon, a far-right political and conspiracy theory movement.

Prior to her son’s removal, Abcug made claims that he had been suffering from seizures, heart problems and other medical illnesses. Licensed medical staff performed multiple tests and examinations. Two doctors, including the child’s pediatrician at the time of the abuse and at the time of trial, testified there were no signs the boy was suffering from any of the conditions his mother stated.

During several hours of testimony Thursday, Abcug denied that she fabricated her son’s medical problems. She also denied knowing anything about the QAnon movement. However, she admitted to meeting people online from “Children’s Crusade” whom she thought could help her “legally” get her son back. She later testified that the same day her daughter reported the conspiracy to police, a man in her home from “Children’s Crusade” received an order to kidnap Abcug. She was eventually arrested in December of 2019 in Montana.

“The verdict today simply followed the evidence,” Chief Deputy DA Gary Dawson said. “While in the defendant’s care, her child was described as having repeated seizures and spells where he would fall to the ground. She claimed he had a brain tumor and that he was dying. Every single one of those reported symptoms disappeared when her son was removed from her care. Abcug’s daughter who was 16 at the time and her adult son made the difficult, yet admirable decision to testify against their mother about what they had witnessed and heard about the conspiracy to kidnap their brother.”

In the three-plus years since Abcug’s son was removed from her home, he has experienced no serious medical issues.

“Ms. Abcug’s son was lawfully removed from her custody in order to protect him from imminent danger,” District Attorney John Kellner said, “There’s no telling what may have happened to that little boy if the kidnapping plot had succeeded.”

Abcug will be sentenced in November. 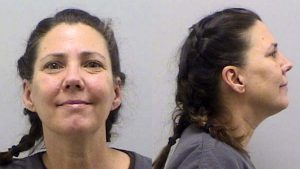