John Kellner was sworn in as District Attorney for the 18th Judicial District on Jan. 12, 2021. The District includes Arapahoe, Douglas, Elbert and Lincoln counties and more than 1.1 million people. 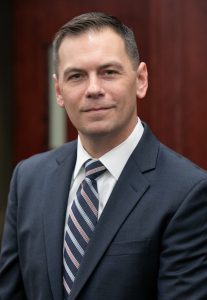 John grew up in a military family, moving frequently. After earning his undergraduate degree from the University of Florida, he joined the U.S. Marine Corps to carry on that tradition of service.

John came to Colorado for law school at the University of Colorado-Boulder. After earning his law degree, he served on active duty with the Marines for five years, including a deployment to Afghanistan as a deputy judge advocate.

He resigned from active duty in 2011 and accepted a commission in the Marine Corps Reserves, where he still serves.

Back in the civilian world, John took a job as a prosecutor in the Boulder County District Attorney’s Office.

He came to the 18th in 2013 to head up the office’s Cold Case Unit. In 2016 he was recognized by the Colorado District Attorney’s Council as “Prosecutor of the Year.”

John lives in Arapahoe County with his wife and two children.