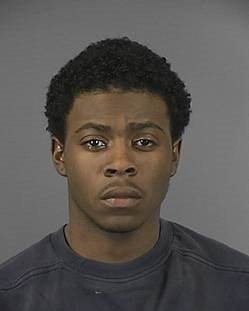 Life in prison for murder at Primo’s Bar in Aurora

An Arapahoe County judge today sentenced Daeshaun Howard, 22, to life in prison for the 2013 death of 22-year-old Christopher Bryant. Bryant was gunned down April 13, 2013, outside Primo’s Bar in Aurora. His friend, Demetrey Adams, 22 at the time, was shot four times but survived.

The jury today deliberated less than three hours before finding Howard guilty of all six counts, including the top charge of Murder 1 after deliberation. That count carries a mandatory penalty of life in prison without the possibility of parole.

These “acts were a cold-blooded ambush of innocent people,” Senior Judge Donald W. Marshall said in imposing the sentence. This defendant showed a “total indifference to humanity at large.”

Howard’s co-defendants have already been sentenced. Christopher Williams, 25, was found guilty of Murder 1 after deliberation and was sentenced in December 2016 to life in prison without the possibility of parole. Jovonte Jiles, 21, was sentenced in September 2014 to seven years in the Department of Youth Corrections after pleading guilty to conspiracy to commit Murder 1 after deliberation.

“Alcohol, ego and malice helped to turn a bar confrontation into a cowardly ambush resulting in one murder, one attempted murder, and two life sentences,” said District Attorney George H. Brauchler. “Justice here was the product of a phenomenal team effort on behalf of innocent victims. Daeshaun Howard cowardly ambushed these unsuspecting victims. He’ll have a lifetime to think about that decision and the harm he caused.”