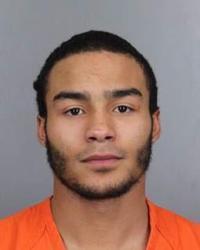 On April 1, 2016, Jones was driving a blue Acura sedan at twice the posted speed limit with two passengers when he hit a brown Mercury sedan at the intersection of South Colorado Boulevard and East Peakview Circle in Centennial. In addition to being drunk, he had marijuana, traces of cocaine and prescription drugs in his system.

Carolyn Burton, 77, was driving the Mercury. Gayle Buckwalter, 82, was a passenger. Both women were killed.
Jones pleaded guilty to two counts of Vehicular Homicide-DUI on Jan. 6, 2017.

“Every element here is governed by choice,” Deputy District Attorney Rory Devlin told the judge in asking for a lengthy prison sentence. Jones “did all those things; no one made him. … Today he needs to become accountable not just to himself or to the victims, but to all of us.”

Judge Douglass sentenced Jones to six years in the Colorado Department of Corrections on each count, to be served consecutively. He also imposed mandatory parole of five years after the prison sentence.

“This is important because every single person who kills another person when they are drunk driving should go to prison,” said District Attorney George H. Brauchler. “Drunk driving fatalities are increasing across the state of Colorado every single year. Drunk driving is a serious issue in this state and this jurisdiction.”

Family of both victims also made statements to the court.

Taden Jones “freely chose to endanger the lives of innocent people. Taden is clearly a danger to society.” Burton’s oldest daughter, Beth Johnson, told the judge. “Justice must be meted out and suited to this crime.”