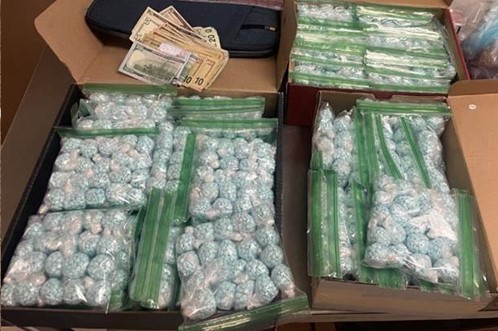 The 18th Judicial District Attorney’s Office and DEA announced the indictment of 8 individuals involved in a large-scale fentanyl distribution operation during a press conference July 6.

As a result of this case, more than 200,000 fentanyl pills were seized along with 9.4 lbs. of heroin, a kilogram of cocaine, 4 guns and approximately $60,000 worth of stolen merchandise.

“In my 31 years in law enforcement, I have never seen anything like the current drug crisis and how it is impacting our communities,” DEA Special Agent in Charge Bryan Besser said. “The availability and accessibility of fake pills right now is staggering. They are available everywhere and anywhere. The illicit drug market is saturated.”

The fentanyl pills are likely coming in from Mexico with the Denver-Metro area being used as a distribution hub. Searches of two separate vehicles were conducted. In one vehicle, officers found approximately 170,000 pills. Authorities also conducted a traffic stop on I-70 for a second vehicle that was under surveillance for drug trafficking. During that stop, officers seized approximately 30,000 pills.

“My Organized Crime Unit (OCU) is committed to investigating and aggressively prosecuting the people who import and peddle this poison. Too often we hear about someone dying from taking just one of these pills.” District Attorney John Kellner said. “I believe this operation saved lives. It wouldn’t have been possible without the help from our partner agencies.”

A copy of the indictment is available via the courts. Criminal charges are merely a formal accusation that an individual has committed a crime. A defendant is presumed innocent unless proven guilty.